RITES FOR FRANK HOGAN TO BE HELD FRIDAY AT ST. JOSEPH'S

Frank E. Hogan, aged 68, one of Oxford's highly respected citizens, died suddenly at his home on Albany street, Tuesday morning, September 21.  He passed away during sleep.  Mr. Hogan had been in ill health for some time but had been able to pursue his work.

He felt deeply the loss of his daughter, Dorothy Hogan Back, who passed away suddenly June 14, at her home in Cromwell, Connecticut.  This bereavement had contributed to his failing health.

Mr. Hogan was born June 7, 1875, in the town of Preston the son of Edward and Bridget Welch Hogan.  His early life was spent there.

He was united in marriage to Miss Kittie Ryan, daughter of Mr. and Mrs. Eugene B. Ryan March 7, 1905, in Oxford.  They have since resided on Albany street.

Mr. Hogan was a contractor and builder, a member of St. Joseph's church, and was prominent in civic life of the village.  He served on the school board from 1921 to 1939.  At the time of the building of the Centralized School in 1930, Mr. Hogan was on the building and grounds committee, and contributed much to the successful completion of our Oxford Academy and Central School.  His name appears on the bronze plate in that institution.  He was mayor of the village from March 1929 to March 1931.  Several years previous to being mayor, he served as trustee on the village board.

Surviving are his wife, one daughter, Miss Leona Hogan, a teacher in Saugerties; a son, Dr. Edward E. Hogan, Lieutenant Commander in the Medical Corps, U. S. Navy, stationed in Washington; three grandchildren, Barbara and Rebecca Le Back, of Cromwell, Connecticut and Pamela Hogan, of Washington, D. C.; two sisters, Mrs. Alfred Quinn of Norwich and Miss Elizabeth Hogan of Oxford; and one brother, Fred Hogan, also of Oxford.

Through his business and civic life, Mr. Hogan had won the respect of all who came to know him.  The many friends of the family join in expressing their warmest sympathy.

The funeral will be held from St. Joseph's church, Friday morning at 10 o'clock, Rev. Thomas Leonard officiating.  Burial will be made in Riverview cemetery.

NOTE:  DATE WAS HAND-WRITTEN ON THE ARTICLE.

Posted by Unknown at 5:45 PM No comments:

George H. Hitt, aged 63, of Norwich died at the Sidney Hospital Sunday morning, September 22, after a long illness.  There are no surviving relatives.  the funeral was held Wednesday afternoon at 3 o'clock from the Seymour Funeral Home.  Burial was in Glenwood cemetery, Afton.

Mr. Hitt was the original owner of the lunch cart on Lafayette Square and operated it here for many years.

NOTE:  DATE WAS HAND-WRITTEN ON THE ARTICLE.
Posted by Unknown at 5:29 PM 1 comment:

Will Be Remembered For His "Rambling South" Column

Samuel S. Hale, one of the oldest and most respected residents of Oxford, passed away Thursday, June 7, in Orlando, Florida, following an extended illness.

Mr. Hale was probably one of the best known men in this section, serving as editor of the Review-Times for a decade until his illness in December, 1927.

He was born in Norwich, the son of Nelson B. and Mary Hale.  The family residence was at the corner of South Broad and Hale Streets, Norwich, the latter carrying the family name.  He attended Yale University and when a young man he read law in the office of George Thomas of Norwich.  He was also associated with his brother-in-law, William Breese, in a box factory in Syracuse.

Mr. Hale was a member of the Oxford Congregational church and served as deacon for several years.  He was interested in everything that pertained to the welfare of the church and community.

Many will remember his articles that were published in the Review-Times, under the heading "Rambling South."  He had also written a number of short play, which had been well received.

He was twice married, his first wife, Anna Arrison, died December 28, 1927, during an epidemic of pneumonia.  Four of the household being stricken, Mrs. Hale, her mother, Mrs. Arrison and Mr. Hale and his sister, Mrs. Julia Eastman, Mr. Hale being the only survivor; the others dying within a week.

On June 18, 1930, he was united in marriage to Miss Lillian C. Haynes of Hartford City, Ind.  Since that time they have made their home in Oxford on Washington Avenue.

Mr. and Mrs. Hale have been winter visitors in Orlando, Fla., for the past ten seasons.  He was an active member of the Orlando Lawn Bowling Club and was popular in Sunshine Park activities, and his plays were produced for winter visitors twice at the Chamber of Commerce.  he was also a member of the Poetry Club.

Besides his wife, Lillian H., he is survived by a brother, Charles of Chicago, and a niece, Mrs. Harry B. Smith of Norwich.  His body is to be cremated and the ashed will be brought to Oxford where burial will be made.  Final arrangements have not been completed.

NOTE:  DATE WAS HAND-WRITTEN ON THE ARTICLE.
Posted by Unknown at 5:25 PM No comments:

Funeral Services Are Held Sunday P. M. At The Home

Mrs. Estelow was the daughter of James G. and Mary Millard Van Wagenen and was born in Oxford, Feb. 20, 1869.  She graduated from Oxford Academy and for several years following was an organist at St. Paul's church and active in musical circles in Oxford the greater part of her life.

She and Mr. Estelow were married July 14, 1891, and they have always made their home here.  Mrs. Estelow was an active worker in the Ladies' Village Improvement Society and served as treasurer of that organization for many years.  She was also a member of the Travelers' Club, the Grange and the Congregational Church.

During her life she gave unstintingly of her time and talents for the upkeep of the church and Sunday School and was likewise active in many movements sponsored by the community for the betterment of Oxford.

She is survived by her husband, one son, Van, and three grandchildren, Mary Elizabeth, Phyllis and Paul, all of Oxford.

Funeral services were held from the home Sunday afternoon at 3 o'clock.  The Rev. Howard F. Deller, D.D., of the Congregational Church officiated and interment was made in Riverview Cemetery.

NOTE:  DATE WAS HAND-WRITTEN ON THE ARTICLE.
Posted by Unknown at 5:25 PM No comments:

Jared C. Estelow, aged 76 years, one of Oxford's most enterprising and public spirited citizens for half a century, died suddenly last Thursday morning of a heart attack in his office in Sidney, where he was secretary and treasurer of the Sidney Production Credit Association.

Mr. Estelow rode over to Sidney that morning as usual and apparently was as well as he had been.  He was stricken with the attack shortly after 9 o'clock and died before a physician could arrive.  He had been suffering with heart disease for over a year, but aside from a few days, had been able to attend to the duties of his position regularly.

He was born at Hartford, Conn, October 13, 1864, the son of Martin and Sarah Swathel Estelow.  His father was a veteran of the Civil War.  Mr. Estelow's parents died when he was a youth, and in April 1881 he came to Oxford to accept a position in the post office under his uncle, William Pearne, who was postmaster at that time.

In 1882 he secured a position in the First National Bank, and here his ability was soon recognized, and he advanced rapidly to cashier, and upon the death of John R. Van Wagenen, president, was named to that position.

Mr. Estelow was president of the bank until the bank holiday of 1933 and the previous year, celebrated half a century's affiliation, with that institution.

During his life in this community he was active in this organization of the old Oxford Electric Light Company, the Oxford Basket & Manufacturing Company and for a short time was publisher of the Oxford Times.

Mr. Estelow joined the Congregational Church soon after coming to Oxford and for many years had been a deacon and superintendent of the Sunday School, and one of the most energetic  workers in that church.

He was a charter member of Oxford Rotary Club, the Chamber of Commerce, Lake Ludlow Club, Inc., and the Canasawacta Country Club of Norwich.   During the World War he was chairman of the Liberty Loan committee for Oxford, chairman of the county distribution certificate of indebtedness, member of the Salvation Army, the War Savings committee and treasurer of the local chapter of the Red Cross.  The latter position he relinquished within the past years.

He was an original member of the Junior Extension Board of the Chenango County Farm Bureau and for many years its chairman.  Upon relinquishing this position during the past year, he was made honorary chairman.

He was one of the oldest members of the Oxford Masonic Lodge and was awarded a 50 year membership medal in 1938.  He was also treasurer of the board of directors of Riverview Cemetery Association and a member of the board for a great many years.

President of Academy Board for 25 Years

When the Sidney Production Credit Association was organized several years ago, Mr. Estelow was the man named to handle the office in Sidney, a position he filled with distinction until the very last.

Funeral services were held in the Congregational Church Sunday afternoon at 2 o'clock and the auditorium of the church was filled with relatives and friends from all over the county.  The Rev. Howard F. Deller, D. D. , officiated and burial was made in Riverview Cemetery.  Bearers were Donald B. Morse, Lyle K. Preston, C. Vernon Stratton, W. Hubert Emerson and Van Burchard of Oxford and George Evans of Sidney.  The board of directors of the Production Credit Association attended in a body.

NOTE:  DATE WAS HAND-WRITTEN ON THE ARTICLE.
Posted by Unknown at 4:58 PM No comments:

Mrs. Margaret Gillman, wife of Charles Gillman, who died three years ago, passed away Sunday in the Binghamton State Hospital after a year's illness.  She was 72 years old.

Mrs. Gillman was born in England and when a young woman moved to this country where she married Charles Gillman June 15, 1876.  The couple made their home in this village continuously for over 50 years.  Both Mr. and Mrs. Gillman were prominent in St. Paul's Episcopal Church.

She is survived by one sister, Mrs. Mary A. Balcom, of this village and one nephew, W. J. Ray, of Johnson City.

The funeral was held Wednesday afternoon at 2 o'clock from the home.  Rev. H. C. Whedon officiated assisted by Rev. J. M. Chambers.  Burial was made in Riverview cemetery.

NOTE:  DATE WAS HAND-WRITTEN ON THE ARTICLE.
Posted by Unknown at 3:48 PM No comments:

APPLICATION FOR ELLEN CLARK, WIDOW OF 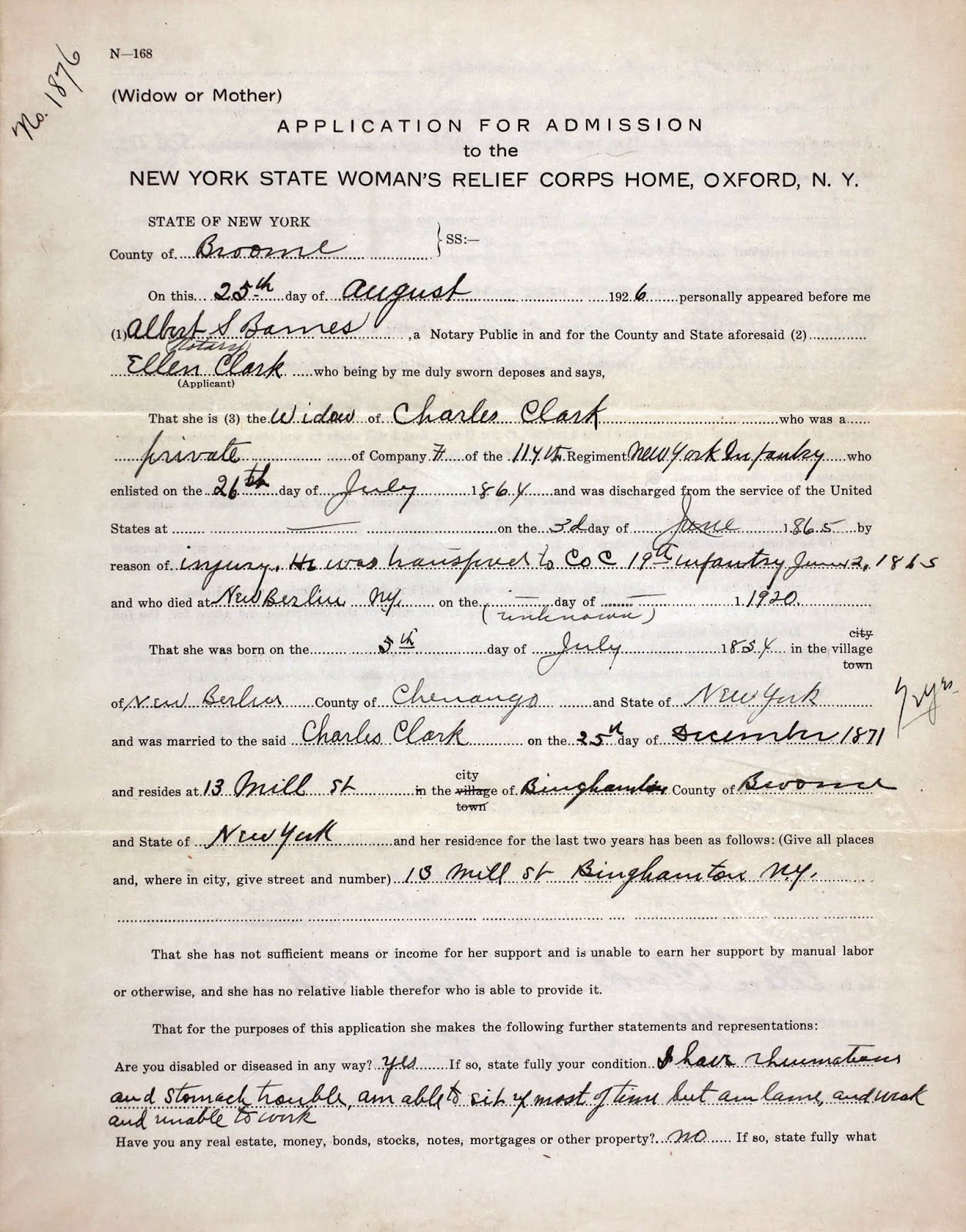 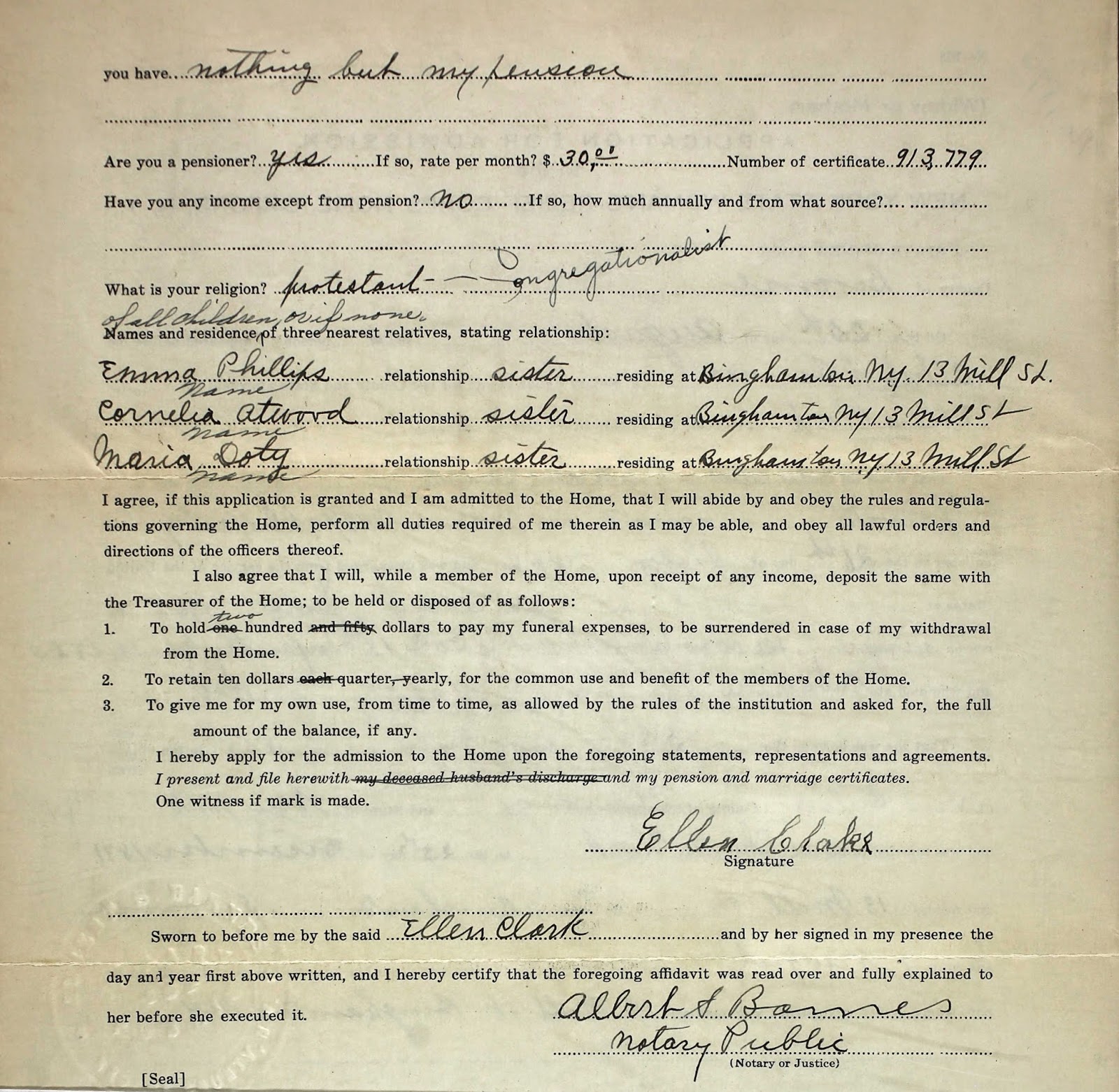